Jose Lezama Lima. A cuban writer hidden to us. 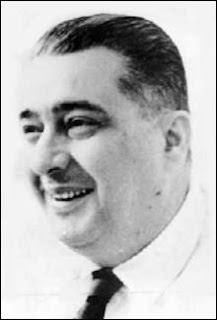 JOSE LEZAMA LINA. A CUBAN WRITER  HIDDEN TO US.

A generation of the 70s that did not access important figures of world literature supported the Castro in a neo Mac Chartism or purge of those who did not agree with the onerous regime.

That they were excluded from us, the students, and only the most curious who had any contact in the provincial library and kept in hermetic drawers hid those true gems of universal literature mainly the authors of the twentieth century.I became a close friend of the old woman who guarded those treasures and so I was able to get some of the so-called "cursed" for the revolution.

Among these books was the same Roman and Catholic Bible and the Gadfly.I once in full Literature class I asked the teacher:

-Dr. X.  Eroticism in literature has to do with the erection of the penis?

She blushed and diverted the answer. Of course I knew the explanation but I wanted to impress my other fellow students like a clamor of adolescent nine.

Orphan of great authors of world-wide level, of musicians who spread the Cuban music by the world, we cried in silence the unquestionable absences. But we listened to them at our private parties.They repudiated by their exacerbated exaltation other world figures who did agree with the oppressive system of the Castro because they had said some phrase of support for Fidel, had belonged to a communist party-especially of Spain-and made flattering evaluations of the prevailing system.

One day a friend brought me wrapped in brown paper the book "HISTORY OF MAYTA" of  Vargas Llosa. I had 24 hours to read the secret book. It was the story of a homosexual guerrilla and his young subordinate. They were in love. There was no explicit sex. The writer then explained that homoerotic love among men was no more than a pretext to further marginalize the guerrilla.It was the first time I read something about a homosexual guerrilla.

Later in exile I was able to read his other books on the freedoms of a democratic country.Vargas Llosa was a friend of Gabriel García Márquez until in a meeting gave Márquez a loud punch. However, this distancing was not only on the personal level, but also in the ideological one, since after the Cuban poet Huberto Padilla was arrested by the Cuban regime in 1971, a group of intellectuals decided to distance themselves from the Cuban Revolution.

However, another group decided to continue supporting it. Vargas Llosa was in the first group, García Márquez in the second.

The beautiful girl, of French descent, Spanish, had beautiful blue eyes that dazzled. She study journalism. When I was in Nicaragua as a doctor, we exchanged correspondence where we talked about Virginia Wolf and Hermes Hemingway. She told me that I had made a mistake in my profession, that I should have studied a career more related to that of Writer.

Once in Cuba I discovered that she was a climber and had the ambition to climb up to Havana. She became a lover of an officer of higher rank and of legal age of State Security. This catapulted her to unsuspected heights. She directed important newspapers and even communes with the regime in TV programs and round tables. I do not criticize her because that was her dream since she was young when she was walking in foreign clothes and wearing glasses in her head in a government jeep doing interesting reports for the national newspaper.

She has talent to write and face to lie to the people with her lies.

Until I discovered LEZAMA LIMA in the 80s. And everything changed.

I discovered the novelist. Essayist and poet after an arduous search with my friend the old woman in the provincial library.

It was his novel PARADISO, masterpiece of the neo-baroque Hispano-American and a reading exercise that took me a month to digest, with a dictionary and everything by my side and where sometimes the mataburros assistant could not find the word invented by Lezama.

The support of Cortázar, who managed to publish his essay "To reach Lezama Lima" in the Casa de las Américas magazine, was important, which meant an important support for Lezama in the face of attacks from the most orthodox sectors of the government.

Finally, the novel was again published, authorized by Fidel Castro.

The appearance of Paradiso represented an event in the literary scene of the time. The most effusive acknowledgments came from abroad, telling Octavio Paz and Julio Cortázar among the most enthusiastic.

He participated as a jury in poetry of the institution, created by the new regime, Casa de las Américas.Between 1937 and 1943 he founded three magazines, Verbum (1937), Espuela de Plata (1939-1941) and Nadie Nadie (1942-1944), and published the poems Enemigo rumor. Around this time he met the poets Gastón Baquero, Eliseo Diego and Cintio Vitier, who later joined the Orígenes Group.

Directed by Lezama and José Rodríguez Feo, Orígenes was one of the most important cultural publications in Cuba at that time, it managed to publish forty issues between 1944 and 1956, and it brought together a group of artists and intellectuals among whom were, among others , Gastón Baquero, Eliseo Diego, Cintio Vitier, Fina García Marruz, Virgilio Piñera, Octavio Smith, Mariano Rodríguez and René Portocarrero. Among the foreign collaborators was Juan Ramón Jiménez.

The harsh official criticism, which with exceptions such as Vitier or Carpentier, described it as "hermetic, morbid, indecipherable and pornographic work", especially for its homoerotic passages.

During this controversy (which included the withdrawal of the novel from the bookstores) the support of Cortázar was fundamental, who managed to publish his essay "To arrive at Lezama Lima" in the Casa de las Américas magazine, which meant an important endorsement for Lezama before the attacks of the most orthodox sectors of the government.

Paradiso conceived as the synthesis and culmination of his poetic system, the novel follows the formation of the poet José Cemí, from his childhood, going back to his family origins, until his university years. It is a complex text, not only for its baroque and poetic exuberance, but also for its heterogeneous nature, which combines narrative, poetic and essay elements, in a work of an initiatory and partially autobiographical nature, which has led some to consider it as a learning novel.

He wrote other novels, poems and essays.He was considered a writer "cursed" by the Castro regime.

Paradiso left a mark on me that I still remember after 30 years, especially the famous chapter XVII homoerotic, without explicit language and where the poet strips himself of his baroque style and speaks to us with clear and simple language. I remember the passage from Badulaque, a young student boy that had a disproportionate phallus. When the teacher punished him to sit on a desk behind him, the boy masturbated at the sight of his classmates and they smiled mischievously.

The owner of a coal cellar in the Badulaque neighborhood spoke with a black boy to intercede for him and obtain the young man's homophobic favors. The sexual scene is almost caricaturesque - Lezama remained a virgin all his life - while the coalman scratched the sacks of coal holding the push of the immense erect member, Lezama resembles him "an old man who was giving birth to a snake"

Lezama was obese and asthmatic and only in his youth made two trips abroad, staying locked in his house with his mother - the death of this meant a hard blow for the writer - surrounded by an intimate circle of young writers who were inspired by him and they took him as a teacher.

The ill-fated Cuban writer who died of AIDS in exile Ricardo Arena, says in his autobiography that he sat on Lezama's legs like a child loving his father.

When I gave Anatomy classes to fifth-year medical students, I asked them a question when describing the male reproductive system:

- Do you know the writing Lezama Lima?

- None- responded, because they had also stolen the great Cuban writer in their pre-university programs.

-Would you like to know how the glans described poetically for Lezama?

- Well as a fine purple filigree waiting for its special function for concern.

Silence of the whole classroom.

That brought me problems with the PCC because most of them were civil servants without a culture that did not want anything to get out of the course of education dictated by the totalitarian system.

His obesity and being an inveterate smoker deteriorated his health.

He was Catholic all his life.Lezama died in 1976.

They say that medical care was precarious, doctors did not know who he was.

They did not mention his death as a scoop on the news of the time.

The most important Cuban writer of the 20th century had died.