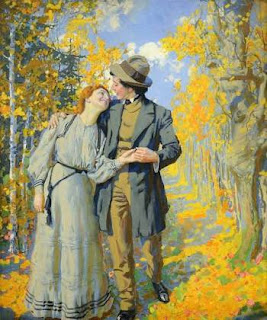 I WAS FALLING IN LOVE GRADUAALLY

She sat at a table opposite me in the chemistry lab so she offered a full view of her whole being. We were then very young, we study the eleventh grade of the College of Guantanamo, Cuba.

I went falling in love gradually, and who does not want the thing, I had an official girlfriend and she was free.   She was thin as a pin, but with abundant black hair and a divine face with deep black eyes. She looks Professor intently and occasionally her gaze lost in mine and held it for a few seconds.      She did not speak with anyone. He was proud and was the pride of Scarlet O'Hara in Gone with the Wind: as if just had left a picture of pulmonary, fragile and delicate in her features but with a relentless wasting character.

My friends who knew my growing love for the girl put her Princess Scarlet and her faithful friend was not graceful class: the Witch of the Forsaken Tower.

She was the best record of the class and the second of the entire course. At recess not leave the yard like everyone else. I was alone with her in the classroom staring at her without saying a word. Her coldness and my shyness put a distance and did not favor an approach.

In English class I managed to sit in front of his desk to hear her voice, receive his touch. But she remained silent as a good student who was and occasionally touched our arms and it was like an electric current through my body.

At private parties or did at school I sought her presence and there she was with her black curly hair and beauty Scarlett. I arm my girlfriend and did not lose even one of his movements, jealous of any boy who approached her to dance. But she rejected them all and stared at the floor or her gaze lost in nothingness.

Gradually stop loving my girlfriend and I submit to that impossible love that seemed to end in platonic. She was the cause of the break and left me free, waiting for the opportunity to confess my love but the distance and coldness imposed always killed every impulse to approach.   I dreamed and thought about her and wrote hidden love poems as good romantic I was. they were not delivered. I kept them in a drawer of my dresser.

So I finish the course, she was the best grades in the classroom. Later both took the career of Medicine in Santiago de Cuba. With the passing of the months my teenage love had cooled although occasionally dreamed of her. She finally had a boyfriend, a handsome blond. I also had a girlfriend: my current wife.

One night I saw her alone in the bus terminal in Santiago waiting on the platform. I came close to her quickly. I had already lost the timidity of adolescence. My head close to her ear:

__ Miss X remember when we were in eleventh grade in Pre Ruben Batista.

__ And you never noticed me staring all the time on yours eyes?   She was already a committed girl and she obvious serious responsed.

__ Well let me tell you were the great love of my life, I thought and dreamed all the time of you. Do not tell me your feminine instincts did not give the alarm ...

__ No, I never realized, you could have told me then.

__ It is your coldness put it away and it seemed impossible that you correspond me ...

__ As time. It's late. I love my boyfriend and we will get married. Why do you say that now?

__ In order not to become a platonic love.

When I tell you relief me because of that fire only ashes remain. I wanted you to know that by looking at the empty did not realize my love for you.

And that was it. But inside me I knew she knew then that I loved her and ignored. Feminine intuition never fails but worse would have been if it had confessed her and a no of her side would have broken my heart forever.

Best I kept the magic and constant discovery and always she would be a reference to women who love later.   And I went to Guantanamo in the same bus with her, dreaming of her as I do now that I am a mature and occasionally her young and light comes as a ghost who comes closer but she does not notice me and desolate stretch one hand to catch her and she vanishes like morning mist of Uruguay.

Havana, frozen in time, with old landmark buildings that defined in the 40's and 50 city looks like a lady blush fills in the face for good presence to tourists but can not hide the aging of the rest the body that is where the real people live.
But those tourists knowing that carmine in the face is not true Havana go to another city, to see how communism has wreaked havoc on her skeletal arms and her famished legs: the last haven of Castro communism in the Western Hemisphere with no mention deteriorated neighborhoods of Old Havana and Centro Habana are feet full keys and bunion and where a world of poor people crowd.
That tourists want to see pictures of East Berlin immediately after the fall of the wall. But that smell of burning oil that gets through my nostrils in Centro Habana is a scent that defines me to Havana and I miss here in Uruguay.
Meanwhile Havana waits patiently the great change that is just around the corner. People are full of hope to die Castro and decide the future but do so in silence, in his heart, as any reporter say they are happy there. They have learned to keep quiet. Communism is the art of putting a gag and introduce a policeman inside every Cuban, except a few brave who dare to challenge the new Gestapo.
Meanwhile Havana waits in silence. A beautiful in its surroundings with its beautiful beaches and people learned that Contex Fashion and Cubamoda are not dictate the wardrobe couture shops but Miami city. It seems a small Miami parading with its usual garb. The village has become consumer goods from the brutal North and and the government can not do anything.
I hope to live long enough to visit a free Havana that every time I see closer. Not to take Daiquiri in Floridita but to walk between its old walls and touch them as caresses a former lover. 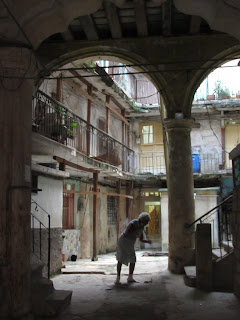