A BRAVE URUGUAYAIN IN CUBA

When I came back to Uruguay after a eventful holiday in Cuba, I met at the airport with a drama that was their sociopolitical overtones and human.
I approached the front row to hear the dialogue. A woman of about forty, still beautiful and well dressed, was in the area to check in with hundreds of passengers and had formed a chorus around her. She was of low lengnt, stylish hairstyle and makeup complexion well but had a stunning voice almost shotting.  Officials dressed in blue guarding the air terminal.
Mrs. x started with a conciliatory tone and all listened to, Most of the passengers were Cubans expecting different flights especially Spain and Uruguay. The issue was that the husband had got ill of waiting the flight and his blood pressure had risen to dangerous levels and airport authorities taken him to an area where the wife could not access.
___ I have to see my husband. See him with my own eyes.
__ Mrs. X . It is not allowed to enter the room where he is. It's restricted area. Do you have the blood pressure medication, if so not easy for a moment?
__ Well I do not I'll give medicine until I see my husband.
__ But understand. You can not pass.
.__ How I can not go? Is this a military fortress ?. Do me the check in the passport and bags and let me go if you do not want to be arme a scandal in front of everyone.
__ It can not. They are orders that come from above. Inviolate.
Mrs. X raised his voice and stood firm. And they surrounded a group of civil servants and policemen from the airport
.__ Give me the medicine, please your husband is wrong
.__ For if this evil with more reason I should pass but if there is a doctor there will antihypertensive medications or misery in which this people also extends to airports.
The officials looked at each other but the lady was unstoppable
__ I live in a democratic country and I can speak without fear what pleases. If I can call the ambassador and even the President of the Republic. It is my right. I'm not like you who have to get the language by the ortho
A official woman asked the next the word meant.
He had already a crowd of people around the lady. Everyone listened but no one dared to open his mouth. A young girl dressed in jinetera intervened:
__ I am a revolutionary but I have Spanish citizenship but the fact that this flight has been delayed enough.
Others says yes with his head but none opened his mouth. It was typical subjected to blackmail the Communist regime into exile: Do not speak ill of the Revolution to be let in and that this was graved in the minds of most exiles.
The lady stood at them firm, would not give the medicine.
__Lady. Do you want to travel today?y__ a cop senior said.
But that does not ashemed the Uruguayan.
__ Of course. With all international rights. You believe it's the first time I travel around the world. They are my rights and be with my husband. If guilt is complicated and I'll sue you for it.
The guards conferred among themselves.
__ If you do nothing it is that they are a pile of shit. So I'm telling you. Pile of shit, but medicine alone will give it to my husband who does not have an attendance of one of the medical world power. Everything is a lie. Pure propaganda.
And they were like a thousand people gathered around the lady and her strong and robust voice reached every corner with the silence. Finally the senior police speak with officials and ordered the Uruguayan to pass the room where her husband was and all of us who traveled to Uruguay follow her as automatons for that brave woman who had told him four truths to the authorities and we with our silence we were victims still living far away, with our silence, of the atrocities of Castrism. 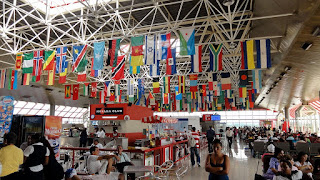 Posted by Orlando Vicente Alvarez at 7:54 AM No comments: