ABOUT LIFE AND DEATH: DIALOGUE OF TWO OLDER MEN IN URUGUAY.

ABOUT LIFE AND DEATH: DIALOGUE OF TWO OLDER MEN IN URUGUAY. 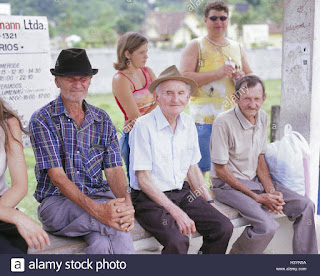 ANOTHER RAIN DAY IN THE STOP OF MALDONADO HOSPITAL.


It was shift day with the Diabetologist. He is the only doctor who does not fail to consult. It would be because he had studied in Cuba and there he was taught how to be a good professional but he was expelled from the faculty or he was imprisoned for several years.

At the bus stop while I was waiting for the bus, my old friend suddenly arrived, the tall, tall man with a prominent nose - Andalusian descent or from another city in Spain - under a torrential rain. We were like frogs and zappers coming out of their hiding place in the middle of summer, confused by the change of climate.

-Good afternoon, I say ... Good morning, Lord. This rain has us all tired. Not a ray of sun. Ostia! What we have done wrong to receive this.-commented the old man.

-Less bad that I do not see the weather report on television. They say that there is going to be a radiant sun and a subtropical cyclone that floods everything and destroys the houses of the poor. Or they announce rainy days, not a day, but several weeks of rain and then the sun comes that could even go to the beaches. As simple as that.-But some success do, sometimes ...

-It is that I almost do not have TV. My aunt Florencia the deceased that God has her in Glory, from Montevideo, gave me one in black and white with a screen of about 6 inches. Old model When it rains it sounds like a cricket and starts throwing sparks everywhere, like Christmas with fireworks and all that.

-I have a wide-screen HD that my granddaughter gave me and I see even soccer games ... -he made a transition- I think I know you.

-Yes. You are not the patient of chest wounds. And how are they going?

-But in this hospital you can not keep secrets. Only the doctors and nurses knew ... Although to tell the truth, your accent when speaking I know it from somewhere. Where are you from?

-It is an island attached to Venezuela. And hear, here among us, there is a hunger of hell as in our neighbor Venezuela, that when there is no lack of rice the toilet paper is missing ... - and I added - Have you not placed worms in the wounds of the chest, look at Northern countries is the last thing to treat infected wounds like yours ...?

-Good. With so much time unattended and going to the Intendance every day ...

- And what do you care about my wounds or ostia, if they are infected or something like that! Maybe you are a doctor, by chance-he looked me up and down-no, you do not look like a doctor or nurse, nor does he know anything about medicine, that's for specialists ...

The old man had a nylon cape that sheltered him from the rain almost to his feet. More than a tent for the rain it looked like an old circus like that of "Circo Beat" by Fito Paez. I wore a simple shirt - this time I had put on a pair of trousers - you know, visiting a doctor in Bermuda is not appropriate for our age, etc., etc.

- Do not you remember me? - I asked sweetly.

-Do not. It's the first time that I see you. Pleasure. Ernestilico is my name because the deceased of my older brother was named Ernestino. Well, to differentiate us you know ...

- Yes- I said in a joke - it would not be that instead of burying his brother they buried you alive ... ha ha ha.

I have noticed that Uruguayans do not have to mention the subject of death or in jest. They have panic ..

.- And changing the subject - I said - that layer to shelter from the rain to Where did he buy it? I mean, to get one also because these days ..

.-This layer was bought by my late wife Esmeregilda there in Piriapolis in a liquidation a few years ago.

-But how old are you as a widower? They must be like 50 years because the layer more than the rain shelter looks like that of an old circus, of those that had before, because of the old and holes that it is.

-You're charging me sir! I do not see that this raincoat is bought for me by the deceased ..

.- By chance it would not be in Piriapolis in a liquidation?

-And how do you know? If I had not told you about it, it's a memory of my deceased deceased ...

-Who told you her name? Yes, she is in heaven.

- This is my old man, we all come to this world just for a little while. But do not worry, with your infected wounds will soon meet ...

He interrupted me.I was going saing:

-Yes. I think. But have faith and hope that only a few weeks remain.

-Do not tell me about the deceased woman like that, or that death is around me! Lightning with you. You do not respect my 80 years.

-It seems that all your relatives were "tuned" at death ...

-You're loading me. Look, I call the cop  and I denounce you for disrespect to an old man of the third age ...

- I am also of the third age. If I am 78 years old ...-He looked at me closely and whispered:- Plastic Surgery will not be done as it is today, to take off your age and look like a kid.

- Perhaps I have told you my name? That gave birth!

-If I'm poor like you. Note that the Municipality has given me a piece of land there in the boundaries of Nuevo Maldonado in the middle of a swamp to build a small house ...

- What intendency or Intendance! If that institution gives nothing to the poor ...

-But with a little help. Ahem…. Everything is resolved under the table.

- And as for the material for the construction? Do not tell me that the Intendancy also gave it to you.

-Ernestilico, do not forget it.

-Good. Ernestilic. Over there they are building a very large barn. I do not know what it is for. I think it is to store the salary papers of the numerous army of officials and users that accumulate years after years in the Municipality and the BPS. I've already got a lot of blocks and bags from Portland like cement, every rainy day, when there are no guards, I'm taking something ...

-Come here, Lord, and how much material has he stolen from the Intendancy?

- Fuck! You are loading me That way you will never build yours house nor when the Colorados return to power ...

-Let me clarify that I already have 25 years of living here. I have voted twice in the elections but in the next ones, I do not know, if I decide for the yellow Front, the Colorado and the Whites ... Yes, so I do not forget so many colors to choose ... But that gives me hope , Ernestico ...

- Do not tell me more Ernestico! My name is Ernestilico.

-Ernestilico! You had known me before, because I do not remember ... Nice to meet you. I'm glad to meet new people. .. Ehhh ... - I said, because senile dementia had gone up

And then his bus came, he got up without saying goodbye and he rose very high, very high until disappearing in the cloudy and rainy sky.

- It will be that now he is another deceased, because of me!

I do not tell you gentlemen, that everything happens to me because I am nice and polite to people, especially to the elderly.By the way, in a month I'm doing my well-deserved 78 years.