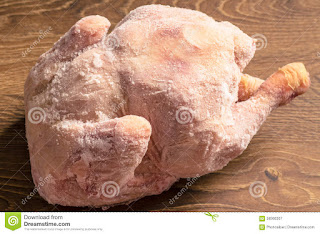 I know this firsthand because I also have my informants in Cuba who are not from the Government or the Cuban KGB. They are simple citizens who read my blogs anonymously and who write me about the Cuban system, how things are going and the work they do.I do not want to denounce them because in some way the systems analysts of the Cuban PCs and informers who earn their salary for two dishes of additional peas would be able to follow the trail to my informants. But they will never know. They are well camouflaged within the hierarchy of the state and they know how to protect themselves from snitches.

Well, the latest news of interest I have received is very serious because it concerns the precarious food of the people.It turns out that they were selling a mince of beef that hungry and hungry dogs did not want.Now they have left the picadillo aside as they once did with Soya's - which poisoned almost the entire country - and they are selling frozen and apparently healthy chickens at the shopping centers.

Of course the queues to get these chickens are to die for. People go early in the morning or sleep in folding chairs that are brought, to reach at least to buy a miserable chicken. These can be eaten.

But the population is already getting tired of these birds, because they are coming out on their skin as "Feather" and some people are "cackling" when they wake up.

The doctors do not know what to do. They are gathering Veterinarians to study the phenomenon.

Do you blame the chicken? No. They must now see more clearly where the hunger comes from, especially meat, that the population no longer produces enzymes to digest them. For how long now! Decades and decades of Communism.

And Diaz-Canel says: now the population is better fed. Nothing like Socialism to distribute poverty equitably.And it adds:

-Today I want another beef steak, well fried with onions like the one that was served yesterday!
Posted by Orlando Vicente Alvarez at 2:22 PM