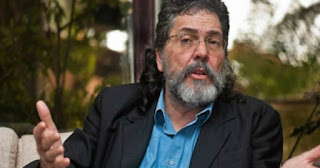 Abel Prieto  stop using our hero's story of independence in favor of those who now and before oppressed her.

Martí did not need the current social media because he was his struggle he had: a good pen and newspapers that published   his articles.

You, who are no longer in charge of the Ministry of Culture and rule the Ministry of Martian Affairs, have folded to the fashion of tweeting like your boss, Díaz-Canel and others.

I want to tell you that exile is as Cuban as you are and that does not take away from us any of Marti's or Castro's or yours. We were born is Cuba and we will be Cubans until death.

The difference is that we know Freedom. If Martí resuscitated, he would escort us against the tyranny that oppresses us 60 years ago. Or would they try to give him a PCC card? But the apostle was not stupid, he knew what freedom he wanted for Cuba.

Are you afraid that your head rolls like that of Robaina, Carlos Lage and Roque? That's why you shout in favor of the government's opprobrium.

You are a intelligent man. You are in time to rectify. We are many Cubans on the island and outside of it, who have not been deceived by so many years of suffering.

IF YOU WANT TO READ MORE ABOUT YOU I SENT TO MY BLOG: