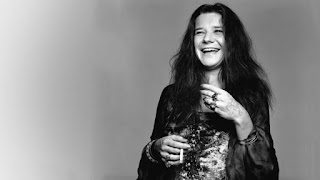 When I was 17 or 18 years old I saw on American TV at the US Naval Base in Guantánamo Bay, a young woman with a careless mane who sang a blues and kicked the stage with despair.
With a heartrending, almost masculine voice, she seemed to shout her rage at the world and implore a God who had abandoned her. It was impressive.
Later I found out her name: Janis Joplin and that was a scene from the famous Woodstock festival where other artists like Jimmy Hendrix, Santana, etc. took part. But I stayed with that American Rock and Roll singer and I started looking for data from her.
Janis Joplin was a young woman with a rebellious spirit who considered herself ugly. It was the female symbol of the 60's counterculture. The short life of Janis Joplin left a great legacy not only for music, but also for the female figure, managed to rebel against many stereotypes of the time, spoke openly about the sexual issue and managed to play millions of souls with their songs. We remember the history of this important artist.
In September 1970 he moved to Los Angeles to record the album Pearl, on October 3, 1970 it was a great day of recording in the studio Sunset Sound Recorders, as a celebration she left with a couple of friends to get drunk. On October 4, Janis did not appear in the studio, then the producer Phil Rothchil began to worry, he told John Cooke, administrator and representative of the band, and he went to her house to visit her.
When he entered the room, Janis was lying next toher bed, on the floor. The cause of her death was an overdose of heroin, this episode had happened before, but this time nobody was at her side to help her. It is believed that the artist received a concentration higher than normal, on the other hand they claim that someone gave her the dose on purpose, but the truth is that at 1:45 p.m. from October 4, 1970 Janis Joplin passed away.
Her creative essence, her emotional challenges, addiction to drugs and music as a source of escape made her one of the most outstanding female figures. I was not afraid to say what she thought, do what she wanted and be with who she wanted. She had many sexual partners and never hid from the world how she really felt, she was named as 'The Cosmic Witch' because of her way of performing on stage.


"Freedom is another word to define 'nothing to lose'."

"When I sing, I feel like I'm in love. It's more than sex, it's the point where two people get to what they call love for the first time, multiplied by the whole public. It's gigantic. "

"Being intellectual creates a lot of questions and no response."